It was a long trip that took two days and two nights of travel. We had been able to have a land trip from Manila to Davao because my companions bought new cars and preferred to transport the cars by having a land trip than shipped it. From Manila to Davao, we had been able to sail in two ferry boats, pass by to different cities, travelled miles of road and pass the three parts of the Philippines, from Luzon, Visayas and to Mindanao.
Our travel started specifically from Paranaque, Manila and we don't have a map with us but we make sure to look for signboards. From Paranaque, we took the SLEX road to Calamba and to Batangas. We pass by San Jose and San Pablo City. Then, we entered the Quezon Province and pass by the municipalities and cities of Candelaria, Sariaya, Lucena City, Quezon Forest Park, Gumaca, Lopez, and Caluag. The most unforgettable road on this part is the Quezon Forest Park which is a DENR preserved park.

We then entered the Bicolandia Region. We passed the Camarines Norte and Sur, then Naga, Legazpi, Sorsogon and to Matnog, where we sailed in the first ferry boat to take. On this part, don't forget to take pictures of the nice view of the sea along the way and the beautiful Mt. Mayon in the Legazpi region.

After two hours of sailing in a ferry boat, we hit the road again and pass Calbayog, Tacloban, Leyte, Liloan and San Ricardo Port where we sailed again for our second ferry boat ride. In Liloan Port, there are also ferry boats that sailed to Surigao but it will took four hours of sailing. Port of San Ricardo is a new port which is few kilometers from Liloan Port that have ferry boats that sailed to Lipata Port for one and a half hour. On this part of the travel there are two distinct bridges, the Agas-agas which is a tallest bridge and the famous San Juanico Bridge which is the longest bridge in the Philippines.

San Ricardo Port to Lipata Port is a nice experience of sailing. Lipata Port is already part of Surigao which already located in Mindanao. From Surigao to Davao, it would take five to ten hours of travel depending on the speed of the vehicle. This is already the last part of the trip after two days of travel. It has been an unforgettable experience and the views along the way is worth it. So next time you would have a land trip from Manila to Davao, don't forget to take pictures and the most important thing, drive safely.
Luzon Mindanao Philippines travel Visayas 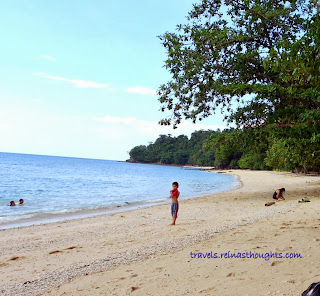 Kalamansig is a town from the southern part of the Philippines. It was already far but a beautiful white beach was hidden there. Our travel to Kalamansig was materialize when our church mates who were fond of motorbikes invited us to a road trip to Kalamansig.                        It was really an enjoyable motorbike ride with the smooth and curve road in going there. Though it was a bit tiresome but this view awaits us there.          Since some parts of the beach is private property, you must ask permission to the owners first but others goes there directly by boats.         I was able to see there a huge Acacia tree and I could not help myself taking a photo of it.          Well that's our ride and though we were able to encounter minor accidents, we still be able to enjoy the place, relax and had an awesome road trip. Picture from google.         Just so you want to know where Kalamansig is, the picture above shows its location an
Read more

More Fun in the Philippines 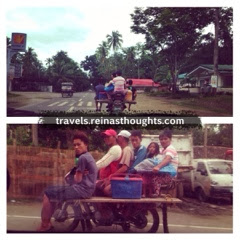 In my recent travel, I was able to capture along the way an amazing mode of transportation. It was a single motorcycle with seven passengers on it and there are still space for more passengers. We are able to passby this along Cagayan de  Oro - Butuan Road. I was lucky enough to capture this while both our vehicles are moving. There are really a lot of things that will surprise you along the way while traveling the islands of Philippines. It is really more fun in the Philippines.
Read more